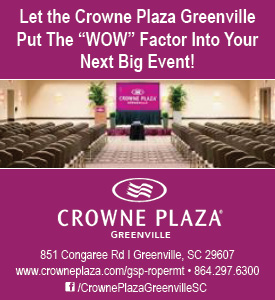 It's February. That means it’s Groundhog Day, or, if you regularly watch the General Assembly, it’s time for the annual gas tax debate.

The House of Representatives will debate the newest proposal this Tuesday.

Governor McMaster – thrust into the center of the debate by national political events – told the House Republicans earlier this month that a gas tax increase is the “last resort.”

If this isn’t the last resort, how bad does it need to get?

The Greenville Chamber and the Upstate Chamber Coalition – at the behest of our thousands of business members and hundreds of thousands of employees – have asked the General Assembly to help for more than a decade. In our surveys, more than three quarters of our members support raising the tax by 10 cents or more. Our members are ambivalent about further DOT reform or offsetting tax cuts because those are distractions from the problem at hand. Even with further Reform, DOT will not suddenly find hundreds of millions of dollars to fix our problem.

But this is no longer a tax debate. It is a jobs debate.

The Upstate sits at an incredible crossroads. We’re at the junction of two major interstates. We are one day’s drive from nearly 100 million consumers. We have a booming inland port. We are three hours from one of the biggest ports in the United States. We have a beautiful airport with capacity to expand.

Yet, we have neglected this advantage by ignoring our roads – something everyone agrees is a core government service. The last time we raised the gas tax was during the administration of the iconic Governor Carroll Campbell exactly 30 years ago. (It should be noted that 35 years ago, another conservative hero, Ronald Reagan, also signed a gas tax hike.)

Despite the fact that the costs of basic items such as labor and asphalt have nearly tripled, our gas tax is stuck in the past with Cabbage Patch Dolls, New Coke, and smoking on airplanes.

South Carolina’s pride on having low taxes is often a benefit, but in this debate, it is negatively impacting our economy. Infrastructure and proximity to roads is the second most-important item for a business looking to locate here – after the availability of a workforce. But by continuing to fight over this basic government service, we’re not talking about expanding broadband infrastructure and other infrastructure items critical for the 21st Century economy.

Our state has reached the last resort. It’s way past time for new, substantial, and sustainable funding for our roads. Lives won’t be saved by another DOT audit. Jobs won’t be created by two more years of political posturing.

The time is now.

Call your House members and Senators and join us in telling them enough is enough.

This article originally appeared in The Greenville News.

Jason Zacher is the Vice President of Business Advocacy